So maybe horsepower is important! 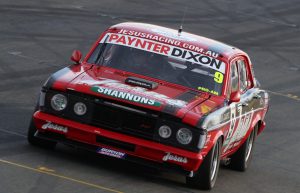 With only one race on late in the afternoon some teams took the opportunity to lay low, but not the Jesus Racing Team.  Willing to interact with the masses of crowds that flock to the mountain, placing kids in the car, talking with fans, and handing out posters before preparing the car for the race.

Starting in P6 Fisher rounded up 5th position on the way up the mountain just as the Safety Car came out for an incident occurring behind him. When racing resumed Andrew was maintaining a position and things were looking good for a top result as he was hunting down old V8 Ute sparing partner Ryan Hansford, who then dropped out of the running with a gearbox issue promoting the Jesus car to 4th position.

As the laps counted down a few cars with big horsepower rounded up Andrew heading up mountain straight, but not without a hard, but fair battling from Andrew as he tried to retake the position into the tight right hander at turn 2.

The last lap board was shown and as Fishtail went from 2ndto 3rdgear the shifter jammed for the second time in two rounds.  Stuck in 2nd gear Andrew limped home in 23rd position.

The Team was encouraged by the speed over the top of the mountain and the way Andrew was able to progress forward even though obviously down on power compared to others.

The mechanics have found the issue with the shifter and have been able to replace the crucial part and with a couple of suspension adjustments they are looking forward to moving forward from the back of the grid during the two races tomorrow.